Before reading “MongoDB vs. MySQL: Detailed Comparison of Performance and Speed”

MongoDB vs. MySQL: Detailed Comparison of Performance and Speed

MongoDB and MySQL share some similarities, but they also have some obvious differences that make them more useful for some users than others. Perhaps the most obvious difference is that MongoDB is a NoSQL database while MySQL only responds to commands written in SQL.

Pros and Cons of MongoDB

For the most part, users seem to like MongoDB. Reviews on TrustRadius give the document-oriented database 8.3 out of 10 stars.

Some of the things that authenticated MongoDB users say they like about the database include its:

Users also have negative things to say about MongoDB. Some cons reported by authenticated users include:

Pros and Cons of MySQL

MySQL gets a slightly higher rating (8.6 out of 10 stars) on TrustRadius than MongoDB. Despite the higher rating, authenticated users still mention plenty of pros and cons of choosing MySQL.

Some of the positive features that users mention frequently include MySQL’s:

Of course, even people who enjoy using MySQL find features that they don’t like. Some of their complaints include:

When it comes to MongoDB vs MySQL performance, you have to take a subjective look at how each database will affect your projects. While you can find some performance features that sound objectively promising, your team members might never use the features that attracted you to a specific database.

Many people claim that MongoDB performs better than MySQL because it gives them multiple ways to create queries. In other words, you don’t need to know SQL to use MongoDB. While some organizations find that the flexibility does add to MongoDB’s performance, other groups will do fine using SQL queries.

MongoDB also gets performance praise for its ability to handle large unstructured data. Depending on the types of data that you collect, you may benefit significantly from this feature.

MongoDB doesn’t force you into vendor lock-in, which gives you opportunities to improve its performance. If a vendor doesn’t give you superb client services, then you can always search for an alternative that will help you make your database more efficient and flexible.

You can also use Xplenty to simplify the MongoDB ETL process. They integrate easily to give you more control over your data.

MySQL performs extremely well for teams that want an open-source relational database that can store information in multiple tables. The performance that you get, however, depends on how well you configure the MySQL database. Configurations should differ depending on the intended use. An e-commerce site, for example, might need a different MySQL configuration than a team of research scientists.

No matter how you plan to use MySQL, the database’s performance gets a boost from full-text indexes, a high-speed transactional system, and memory caches that prevent you from losing crucial information or work.

If you don’t get the performance that you expect from MySQL data warehouses and databases, you can improve performance by integrating them with an excellent ETL tool that makes data storage and manipulation easier than ever.

In the MySQL vs MongoDB speed debate, MongoDB usually comes out as the winner. MongoDB can accept large amounts of unstructured data much faster than MySQL. It’s difficult to measure precisely how much faster MongoDB is than MySQL when handling large projects. The exact speed that you experience can depend on a variety of factors, such as your internet connection’s bandwidth, the distance between your location and the database server, and how well you organize your data.

All things being equal, though, you can expect MongoDB to handle large data projects much more quickly than MySQL.

Choosing Between MySQL and MongoDB

Whether you choose MySQL or MongoDB probably depends on how you plan to use your database.

You will likely prefer MySQL for projects that can benefit from a strong relational database management system, which means storing data in a table format. MySQL also makes an excellent option for cases that need data safety and fault tolerance. If you have high-quality data that you have been collecting over a long period, it makes sense to choose MySQL.

Keep in mind that your team members need to know SQL to use MySQL. If they don’t already know the language, you will need to provide training that brings them up to speed.

MongoDB can become a better option when you want to take advantage of data clusters and search languages other than SQL. Anyone familiar with a modern coding language will have the basic skills to start using MongoDB. MongoDB also excels at scaling quickly, letting multiple teams collaborate, and storing diverse data formats.

Some people will have difficulty understanding the information stored in MongoDB because it doesn’t use data tables that make browsing easy. Over time, though, users can get used to MongoDB’s document-oriented storage system.

Optimize Your Data With Xplenty

When you take a close evaluation of MongoDB and MySQL, it becomes obvious that both have good and bad points. Few companies release objective data that let you compare speed and performance. Even if you consulted those reports, your system, configuration, and needs could give you a different experience. You can, however, improve the speed, performance, and flexibility of both databases by connecting them to Xplenty.

Xplenty’s ETL solution works quickly to extract information from any database. It can then reformat and add value by transforming the data. Finally, you can load the information destination of your choice. If you already have extensive experience using a specific database, Xplenty will iron out some of the kinks to give you a better experience.

Xplenty users also benefit from its no-code and low-code environment. Extracting data from MySQL becomes much easier when you connect the database to Xplenty because you can find information without learning a query language.

Do you want to learn more about how Xplenty can enhance your experiences with MySQL and MongoDB? Schedule a free demo to discover which features apply to the database you prefer. 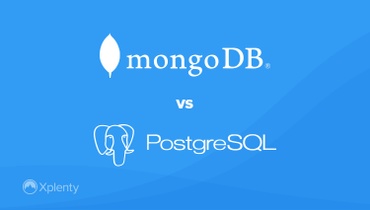 MongoDB and PostgreSQL are both cutting-edge database technologies that compete strongly for attention. Which one is best for your company?

We break down the key differences between a data warehouse and database, including some important insights on data marts and data lakes.