Enterprise Service Bus (ESB) is a communication model that allows business applications to communicate with each other. An ESB framework involves a system of business rules and common standards, and a software mechanism that passes messages from source to destination.

An ESB generally exists as standalone middleware. It can deliver a Service-Oriented Architecture (SOA), typically for on-premise networks.

How does ESB Work?

ESB is one of the more established integration methods and has long been popular among organizations with heterogeneous, disparate applications on their network.

Before ESB, most integrations worked on a point-to-point basis, often relying on hand-coded integrations or manual file uploads. This approach was unreliable and created scalability issues, as each new discrete application required an n+1 number of integrations.

The Enterprise Service Bus model helped smooth the integration process by implementing the SOA principles. This strategy imagines a service-provider and service-consumer model, with providers and consumers connected by a bridge.

The ESB middleware is generally stateless, which makes it unsuitable for large-scale data transformation. Instead, businesses would use an Extract, Transform, Load process, which provides an intermediary staging layer.

ESB is somewhat in the shadow of a newer approach, Integration Platform as a Service, or iPaaS.

iPaaS works in the same basic way as ESB. It sits as an integration layer between applications and allows them to pass data between each other. However, there are some key differences between the two.

ESB generally sits on an on-premise server and connects systems on the enterprise network. Some ESB solutions can integrate with cloud services, but the middleware itself often sits on a local machine. This can be faster and means that data never leaves the enterprise network. However, the organization must provide adequate server space for the ESB.

iPaaS is a cloud-based service that third parties host and offer to businesses. It integrates easily with other cloud services, but it can also act as a hybrid solution, connecting to both cloud and on-premise systems. Because it’s cloud-based, users have a great deal of flexibility when they need to scale up or down.

ESB has been around as a concept since the 90s, although the principle was first properly instantiated in 2002. The ESB model anticipates working with a number of disparate sources, each of which stores and transmits data in a different way. Organizations that rely on older systems may rely on their existing ESB.

iPaaS is a product of the cloud era and often works best with other cloud-based applications. iPaaS can integrate with older on-premise systems, but often this takes a greater deal of configuration work than integrating with newer services. Newer companies, as well as those going through digital transformation, may choose to adopt iPaaS for their infrastructure.

ESB uses adapters to communicate between applications. Adapters often require someone to code and configure them, and that person must have an understanding of the data structure of the source application. Each application has its own way of communicating, which may include file uploads and SOAP or RESTful APIs.

iPaaS solutions generally offer a library of integrations for popular cloud-based applications. This allows users to perform low-code or even no-code integrations, which means that non-IT users can integrate systems on iPaaS. If an application is not supported in the library, the user may have to code one.

ESB is stateless and not designed to hold large quantities of data at any time. Messages pass through the ESB from source to destination. While these messages may undergo some transformation, the ESB can’t perform any kind of large-scale transformation.

iPaaS usually can hold more data and perform more sophisticated operations on incoming data. This can be useful if the enterprise needs to cleanse, validate, or integrate data when it passes between one source or another.

However, when the operation involves a large movement of data or complicated integrations, most organizations will use an ETL (Extract, Transform, Load) process. ETL solutions like Xplenty hold incoming data in a staging database, where the ETL can perform extensive transformations. This is the best approach for activities involving large-scale data movement, such as populating a data warehouse.

Integration Platform as a Service (iPaaS) is a cloud-based approach to enterprise application integration that uses a library of pre-programmed integrations.

What is Lean Integration?

Meta: Lean integration is a form of process engineering that focuses on creating value for customers, reducing waste, and prioritizing long-term thinking. 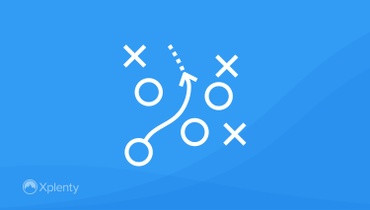 5 Big Data Problems and How to Solve Them

A compilation of the 5 biggest big data problems, and how businesses can solve them with the right data integration tools.

Data integration is best handled with a feature-rich tool, and those can be costly. Here's a comparison of some tools that feature a free version.