Before reading “How Do I Use Heroku?”

How Do I Use Heroku?

A fully-managed, scalable cloud platform, Heroku lets developers build, deploy, and manage apps. Small and big businesses alike use Heroku to test prototypes and launch critical business applications. More than 9 million apps have been created and deployed on Heroku. The platform manages more than 2 million data stores and the number is continuously rising. Some of the biggest brands, such as Macy's and Toyota Motor, trust the platform for scalable deployment of mission-critical apps.

As an enterprise or even a small team of developers, how can you use Heroku to shorten your time to market and make the app development life-cycle more efficient? Let's take a look.

With Heroku, you don't need to worry about managing servers, databases, or infrastructure anymore. Heroku handles all of that for you. The platform started off with support for Ruby on Rails, only. Today, it supports most of the popular programming languages, including Python, Java, Node, Scala, and others.

The platform also provides managed data services for popular databases including Postgres, Redis, and Apache Kafka. And Heroku's marketplace has add-ons that let you scale the capabilities of your mobile app. From monitoring tools to caching services and marketing add-ons, integrating your app with third-party tools on Heroku is straightforward.

Next, you need to install Heroku Command Line Interface (CLI). CLI is the most efficient way to manage your apps. If you are a complete beginner to app development and aren't comfortable with a command line interface, you can use Heroku's dashboard for app management.

In order to install Heroku CLI, you first need to install Git. Once you have Git on your system, you should configure it before you start deploying apps to Heroku. Configuring Git allows you to set your user identity and set the default text editor, which is important to avoid running into unexpected errors.

To install Heroku CLI on MacOS, type the following in your command line:

For Windows, download the 32-bit or the 64-bit installer, according to the machine you have.

Here are other methods to install Heroku CLI on your system.

Now that you have the prerequisites, you are ready to start deploying your mobile app to Heroku.

Let's take a look at how to use Heroku with Python and Node.js, two of the most popular programming languages.

Now that you have cloned your source code, it is time to deploy your app.

In order to deploy your app to Heroku, you first need to create a Heroku-hosted Git remote repository. This is a version of your local Git repository that lives on other servers. From your app's root directory, run the following CLI command:

Once you have created a remote git, it is time to deploy your code. You do it with the git push command, as follows:

You need to push the code to the master branch of your remote repository in order to see changes. If you push the changes to any other branch, the changes will not take effect.

Now, you can visit your app on the browser with the following command:

To tell Heroku that it is a Python app, you need to install key files. Make a requirements.txt file that lists all the dependencies together. To install the text file, run the following command:

When you run this command, Heroku installs Python dependencies locally. Make sure you have Postgres installed correctly, though, for this step to function properly. Once you have declared the dependencies, you can run your app locally.

Heroku has a large number of data stores in its marketplace. It provides managed data services for Postgres, Redis, and Apache Kafka. By default, Heroku adds a free Postgres Starter Tier database when you deploy your app.

Here is how you can upgrade to a better Postgres tier with the help of add-ons in Heroku. The process for adding other data stores to your app is the same.

The process of deploying a Node.js app to Heroku is exactly the same as outlined above. Just make sure that you have Node.js and npm installed on your machine.

Data from your apps should be integrated with the rest of your tech stack for more comprehensive business intelligence. Xplenty comes with Heroku integration right out of the box. You can integrate your Heroku Postgres data store with other data pipelines within minutes on Xplenty. Schedule a demo to see how Xplenty lets you build ETL data pipelines from Heroku to your data warehouse.

Heroku data transfer is easy when you use cloud Extract Transform Load. Discover how with Xplenty’s no-code ETL integrates with Heroku and Heroku Connect.

11 Best Heroku Add Ons Out There

Learn how to bring your Heroku use to the next level with this list of the seven best Heroku add on tools from Xplenty's experts. 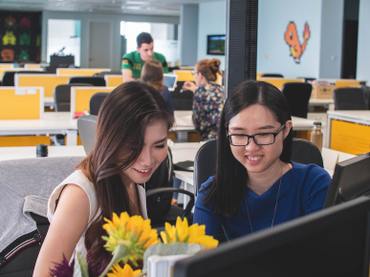 Benefits of Heroku Connect in Salesforce

How can an Xplenty integration add value to the relationship between Heroku Connect and Salesforce in real life?